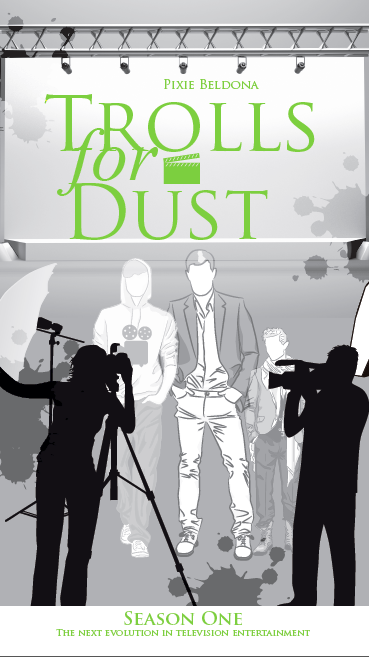 This is it, the story that became the series.  Happy reading, Happy St. Patrick’s Day, and remember Trolls for Dust, Season One ebook is only

The game was easy.  All one had to do was make it through eight seasons still standing, still alive and whole.  That was it.  They gave bonus points if you still had a love interest standing with you and friends too.  The rarest points to earn were for children, for it being a supernatural cop show, a dramatic kid death was usually used to give the viewer a good long cry.

Jenna sat outside a cafe and drank her last cup of coffee in the real world.  In an hour and a half, she would be an official player in TV RE-AL, the latest hit, semi-reality, game show series from Trolls For Dust or TFD.  TFD was the channel for anyone under the age of thirty.  Their shows were edgy, fantastical and full of sly humor.  Older people didn’t watch it because they’d already seen the same shows with better characters, better dialogue and back in a time when it really was edgy, not just a copy of a copy.

TV RE-AL put seven players in a spoof on a older series.  Jenna’s series was Dark Redemption, in which she played a young police detective who’s calling was fending off monsters of various sorts.  Her love interest was a monster with a conscience, her friends fellow officers.  The seven other players were also on the show, but she wasn’t allowed to know who any of them were; they didn’t know she was a player either.  All of the actors and the crew would be cloistered away from the rest of the world for six months while they shot the first season.  At the end of each episode the actors would have private meeting with the writers and convince them of why their character deserved to stay on the show.

Jenna blew on her coffee, trying to cool it faster.  Stupid idea, really, but it was a paying gig and it had been awhile since she’d had one of those.  Poor deluded writers.  As if the game show or even the show, if it were a real show, had anything to do with them.  The show-biz game had always been the same in her experience:  The more popular your character, the longer they stay on the show.  A minor, annoying character could become, well, Steve Urkel of Family Matters fame.  And a character like that, the execs would keep on, no matter what the writers thought about it.  She took a big gulp of coffee and winced as it burned down her throat.

Her character was a main one, so Jenna wasn’t worried about her being killed off too quickly.  Trouble was, when one contestant got axed, another would take their place and that character could potentially be a threat.  She had to work out a strategy, find some way to survive and simultaneously get the other contestant’s characters off the show.  For that, she needed to know who those other contestants were.  For that, she needed Alan Cable, a disconcertingly efficient private detective who worked by day as a crew member for channel TFD.

She drank her coffee down to the bitter grounds at the bottom and studied the notepad in front of her.  It listed seven names with hers at the top in one column, and the characters they played in another.  Jenna read the list over and over, engraining those names in her head.  So engrossed in her task, she failed to notice two men sitting a the cafe next to hers.  They watched her closely through the window.

“But it’s edgy.  Edgy is the key nowadays.  We give everyone a fake list, and six seasons in, when they finally figure out they’ve been duped, that’s when the panic sets in and the adrenaline.  That’s when the viewer count multiplies astronomically.”  Alan answered.

“Yeah, but kids today…You think they got the patience to wait that out?”

“I know they do.  Patience pays off, always.”  Alan grinned.  He finished off his last bite of cake.  “Poor girl.  She doesn’t even know what’s coming.”

On sale at Amazon.com

Pixie Beldona is the pen name of a story writer from Minnesota.